How Many Cans Does it Take With CrashOne?

If I said it was a hot day capturing Crash’s “Popeye” installation at JCMAP (Jersey City Mural Arts Program), that would be an understatement. It was hotter than the 191st Tunnel on any summer day.

Originally, Crash was told specific wall dimensions, but upon arrival, he discovered his wall increased by half its original size. I’ve been on many walls with the legend, but never experienced a wall space doubling in size, especially last minute. Plus, there was a lot water in the walls. Crash pointed out the damage several times while “Popeye” came to life.

NOE: “How many cans does it take to crush this wall, Crash?”

CRASH: “How many cans does it take? Originally we ordered something, like 75-100 cans, but that was before they decided to give me a bigger wall…”

Popeye was filled in with help by BR163 and Drone frames were captured by Nelly Nel. The scorching Popeye installation successfully wrapped in two blazing unforgettable days of getting up in Jersey City! 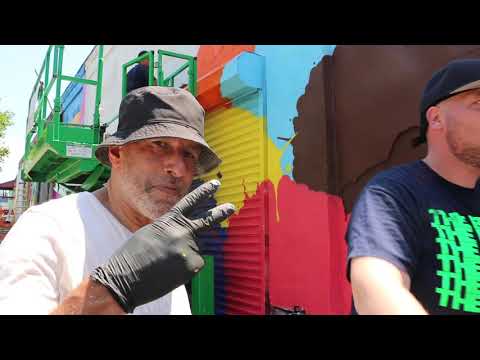 Previous post:
BLM Mural on Centre St. Painted By Tats Cru & Friends Next Post:
Beyond The Gate With Jon143_