The Mural Kings were commissioned by Highbridge The Label to paint five A-Boogie Wit Da Hoodie “Artist 2.0” album promotions across New York City’s 5 Boroughs. Keep in mind, BIO, BG183 and NICER from Tats Cru aren’t new to these types of requests. They’ve been doing album promotion since 1985, starting with a mural for Grandmaster Flash’s album cover titled “They Say it Couldn’t Be Done.” And in 1995, Fat Joe “Jealous Ones Still Envy” was Tats Cru’s first album promotion painted on side of a building located on Cross Bronx Expressway.

Naturally the first, A-Boogie Wit Da Hoodie Artist 2.0 mural was painted in The Bronx, second was Harlem, then followed by Brooklyn, Queens and ending in Staten Island. Staten Island is their largest mural of the five. BG183 said. He enjoyed painting borough-wide because he was able to interact with a lot of different fans and inspiring artists.

I get to see a lot of behind the scenes, and there’s never a dull moment where you’re educating yourself about graffiti with Tats Cru. The Queens day started at 9:00 AM by meeting BG183 and NICER at Headquarters. I ended up riding in back of Tats Cru’s van documenting their entire day. BIO was last to arrive and finish washing the wall and putting final touches on Artist 2.0. Note to self, whenever you’re close to graffiti royalty, you’ll end up learning a lot of gems. Make sure to always pay attention! 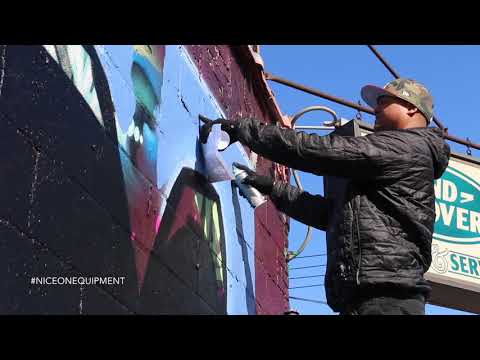